Just like there's a "Vienna, Virginia" and a "Vienna, Austria" - there is also an "Athens, Georgia" and an "Athens, Greece". And this month, Athens (GA) met Athens (Greece) right here in Vienna (VA)! 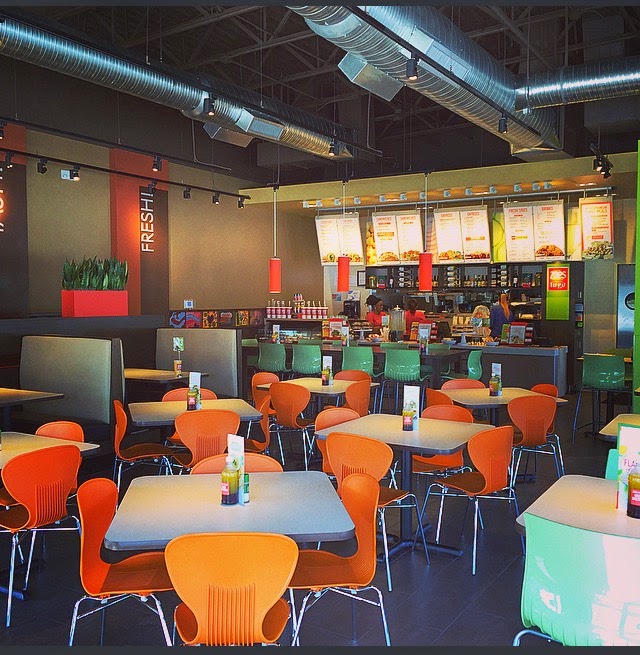 Yes, this month Vienna welcomed another new restaurant to Maple Avenue. It's called "Zoe's Kitchen" and the restaurant's style is a mix of southern hospitality and Mediterranean-inspired flavors. Sounds like an offbeat combination, doesn't it?

Well, Zoe's Kitchen is a chain named after Zoe Cassimus. Zoe was born in the Mediterranean and raised in the South. It wasn't exactly Athens, GA and Athens, Greece - but it was "the South" and "the Mediterranean". Now it all makes sense, right?

We stopped in to Zoe's last week and we give it a thumbs-up as a nice addition to the dining options in Vienna. A few things need to still be worked out though:

Parking: We arrived fairly early for lunch - right when they opened at 11AM. We did that purposely because this was our 3rd attempt to try out Zoe's. The other two attempts failed because we couldn't find parking. By the time we left at noon, the same issue existed and traffic was backed up onto Maple Avenue once again.

Cooking Time: The ordering process is similar to that found at Noodles & Company. You order & pay at the counter, serve your own drinks and then they give you a stand with a number on it. When your food is ready, it's brought to your table. We didn't wait too long. But we noticed quite a few people waiting for to-go orders, many of whom ordered right after us and were still waiting after we finished eating.

Hopefully, these are just issues that come with opening week jitters. The food itself was tasty. Very flavorful. And not your "same old same old". It was fresh. And the menu is both healthy and imaginative - with lots of options for both meat lovers and vegetarians. Take a look at the menu.

Every person we encountered was super friendly. And the atmosphere was clean, bright & cheerful. It's a great place to grab lunch during the work day, meet friends for a snack and it's also a good family spot for dinner. They even have wine & beer available for the adults.