8 Things You Must Do In Vienna Before Summer Ends

The temperatures are becoming a little more moderate. (Well, 80's sure beats 90's/100's doesn't it?!) And that means the summer season is coming to a close. I know summer doesn't "technically" end until about September 22nd, but when "Back-To-School" comes around - doesn't it feel like summer is over?

So you're back from vacation & back in Vienna. How did you fill in the blank in the sentence above? If you filled it in with something you haven't done yet - don't worry - you still have a few days left.

Here are a few of the ways we would fill in the blank:

*** It's not really summer in Vienna until we picnic on the lawn & catch a performance at Wolftrap. We recently had a casually elegant picnic at the top of the sledding hill at Wolftrap and then rocked out at The Counting Crows concert. Now THAT's what I'm talking about! And it's not too late. You can still catch Donna Summer, Tony Bennett, "The Sound of Music", "The Ultimate Doo Wop Show", "The Lord of The Rings", Abba, Jackson Browne & the Golden Dragon Acrobats from China! 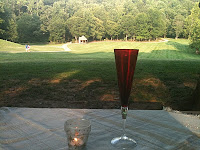 *** It's not really summer in Vienna until we enjoy a meal al-fresco and there are lots of options. My daughter & I recently shared a meal at Noodles (a super-popular destination for those with children in tow). Or you can try Sushi Yoshi or Church Street Cellars (both on charming Church Street). 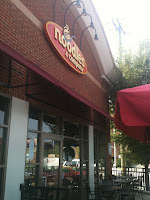 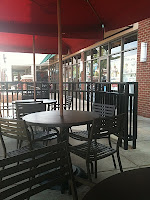 *** It's not really summer in Vienna until we have grown or eaten so many tomatoes that we can't bear the thought of making or eating another jar of marinara sauce or another caprese salad. If you haven't had your fill of tomatoes yet, you can find the best ones at the Vienna Farmer's Market or the cute little organic market across the street from Whole Foods. 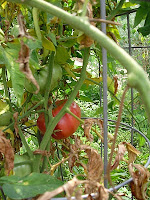 *** It's not really summer in Vienna until we have splashed in the fountains at the Vienna Town Green (or at least dipped our toes in!). 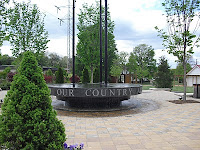 *** It's not really summer in Vienna until we have jogged, walked, run, rode, strolled the W&OD Trail. (And don't forget - it's slow to the right, pass on the left!) 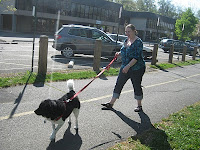 *** It's not really summer in Vienna until we have gotten ice cream or custard, walked outside and attempted (unsuccessfully) to eat it before it melts. And you've got lots of options here - Neilsen's Custard Store, Baskin Robins, Dairy Queen and Cold Stone Creamery - to name a few. We haven't done this one yet - so I'm thinking we should have a family taste-test contest and make the rounds of all four! (And PS - Neilsen's even has curb-side pick up if you call ahead!)

*** It's not really summer in the Town of Vienna until we have finished our Spring cleaning and called in for a "special pickup". (Yes - we know Spring cleaning is meant to be done in the Spring, but some folks don't get around to it until school is out!) If you live in the Town of Vienna - you receive two free "special pick-ups" per year for things you may not be able to recyle - like discarded furniture, brush, playground equipment, things you couldn't sell at your garage sale (or even give away). Check the requirements here.

*** It's not really summer in Vienna until we catch a FREE concert at either the Vienna Town Green or Nottoway Park. The Vienna Town Green series has wound down, but you can still catch The Grandsons (rockabilly/wing/lounge music) at 7:30PM on the 26th at Nottoway Nights!

Lastly, while some people mourn the end of summer (and if that's you, then you can extend summer a little bit by attempting the entire list above) - here's an old commercial that presents another point of view:

Endless summer . . . just another reason why WE LOVE LIVING IN VIENNA!

Posted by The Belt Team at 2:15 PM No comments:

"Be A Winner and Eat Your Dinner"

"Be a winner and eat your dinner". My Dad used to say that to me almost every night when I was a kid. I had a small appetite and he was always encouraging me to eat more. Well - I don't have that problem any more (darn it!). I really enjoy dining out. And that means I always look forward to "D.C. Restaurant Week"!

Twice a year, the Restaurant Association of Metropolitan DC sponsors a week where local restaurants offer 3-course fixed price meals. The cost is $20.10 for lunch and $35.10 for dinner. This summer, "DC Restaurant Week" takes place from August 16-22. Some restaurants offer both specially priced meals and some offer just one or the other. It's a chance to try places you might not normally go to - maybe splurge a little - or try that place you've been hearing everyone talk about.

And if you live in Vienna, Virginia - you don't have to go all the way to DC for "DC Restaurant Week" because it comes to you! So take out your daytimer - ask your spouse out for a date - grab your girlfriends - and try one of the restaurants listed below. (Note - we included restaurants in Tysons Corner even though they are "technically" in McLean because we really think of Tysons as Vienna).

“After a good dinner one can forgive anybody, even one's own relations.” Oscar Wilde

"Find me a man who's interesting enough to have dinner with and I'll be happy.” Lauren Bacall

“Never argue at the dinner table, for the one who is not hungry always gets the best of the argument” Richard Whately

"A man seldom thinks with more earnestness of anything than he does of his dinner." Samuel Johnson

"All great change in America begins at the dinner table." Ronald Reagan

"Dinner was made for eating, not for talking." William Makepeace Thackeray

"I like to be bought flowers and taken out for dinner. I like a man to be a gentleman. I don't like to be treated as if I am brainless. I like to be respected and to give respect." Sharon Stone

"It is easy enough to be moral after a good dinner beside a snug coal fire, and with our hearts well warmed with fine old port." Henry Mayhew

"Make your having dinner out become The Event of the Night, instead of just the beginning." John Walters

"Never argue at the dinner table, for the one who is not hungry always gets the best of the argument." Voltaire

"Show me another pleasure like dinner which comes every day and lasts an hour." Charles Maurice de Talleyrand

"Some people ask the secret of our long marriage. We take time to go to a restaurant two times a week. A little candlelight, dinner, soft music and dancing. She goes Tuesdays, I go Fridays." Henny Youngman

DC Restaurant Week . . . just another reason why WE LOVE LIVING IN VIENNA, VA!

(More posts about restaurants in Vienna: "Bazin's On Church", "It's Friday Night - What Should We Do", "Travel Around The World - Right Here in Vienna" )
Posted by The Belt Team at 8:36 AM No comments:

Plus - check out this new listing on Arabian Avenue in The Trails!
Posted by The Belt Team at 11:52 AM No comments:

Did You Know Sunday Is A Holiday?

One of the great things about living in Vienna, VA is that the climate in the summertime is perfect for gardening. Just drive around town and you'll see all sorts of gardens - from flower gardens to herb gardens to vegetable gardens. Some are tiny little plots and others take over entire acres of land. Vegetables especially seem to grow like crazy once we hit August. You'll see people's gardens absolutely OVERFLOWING with tomatoes, zucchini and yellow squash.

And as you're driving around town, you might also notice that LOTS of people have front porches. It's one of the reasons we love living in Vienna. It might be old-fashioned, but we like to sit out on our front porch & chat with the various neighbors as they stroll by on their evening walks. Today's world may be filled with emails, texts, tweets and IM's - but we still enjoy the give and take of face-to-face conversation.

Now, you may be thinking "what does that have to do with holidays?" . . . in fact, August doesn't have any "holidays" in it, does it?

There's a saying that goes around at this time of year. It goes "My grandfather always said that if you have to buy zucchini, you must not have any friends." So - now that you know Sunday, August 8th is a holiday - are you going to celebrate it?

Zucchini in August . . . just another reason why WE LOVE LIVING IN VIENNA, VA!
Posted by The Belt Team at 10:26 AM No comments: