"Cobra Patrol at Thistle Ridge!" It sounds like the title of an old Hardy Boys book, doesn't it?!


But "Cobra Patrol" is actually part of Den 7 and the Vienna Cub Scouts. And I had the pleasure of tagging along with them as they visited after school with one of Vienna's premier builders along the way to earning their Engineering Badge. 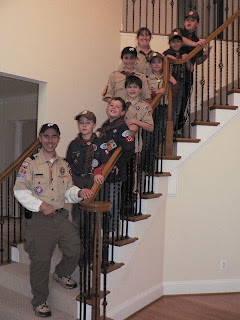 Last month, Bryan Deege (Vice President of Sekas Homes) and Susan Hussey (Realtor with The Belt Team and Director of Sales & Marketing for Thistle Ridge) hosted "Cobra Patrol" at Thistle Ridge (one of Sekas' new home projects in Vienna). Bryan gave the boys a thorough education in construction, planning & building and showed them everything from blueprints, floorplans & site plans - to a home just begun 5 days prior - to a home just nearing completion. 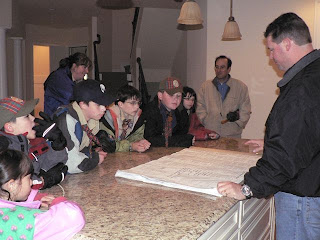 Bryan is passionate about what he does. And his passion definitely translated to the boys. In fact, I wouldn't be surprised if one of these Cub Scouts becomes a builder when he grows up!

One young man wanted to know how many contractors it takes to build a house. The answer was "over 100!"

The boys were particularly interested in how the various rooms on the plans were named. Ryan R wanted to know what a "billiard room" was. And after Bryan told the boys about the various creative things they have done in basements (like installing billiard rooms, home theatres & batting cages), one young man asked, "Can you put a hockey rink in the basement?"

I was truly impressed with how well the boys paid attention. Bryan talked about wiring and dry wall and drainage and all kinds of "technical" things. He talked about the sequencing of contractors and how he organizes who does what, when & how. Bryan told the boys, "The key to building good homes is being organized, detailed and having a commitment to doing things right." I think that's great advice for life - not just for building houses, don't you think?!

Bryan then toured the boys through an under-construction home and they got to see a lot of "behind-the-scenes" things - what's inside the walls & behind closed doors. 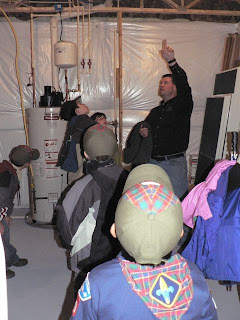 One young man wanted to know whether the builder gets to name the streets in his subdivision. Bryan explained how the street names must be unique (no two streets in the same town or city can have the same name), but that numbers can be repeated. Then he told them how the naming process works.

He said that the builder is required to submit a list of 15 names to the County for approval - a first choice and 14 backups. The County goes down the list and approves the first unique name it sees. Bryan then shared a story about how a certain street in Vienna was named. A few years back, Sekas Homes was building in the Bennett Kiln subdivision. John Sekas (the President of Sekas Homes) submitted a list of 15 street names and then told the County "and if none of those are available, name the street after my dog Brenner". Well, you got it - there is now a street in Vienna named Brenner - after John Sekas' dog. The boys thought that was HILARIOUS! 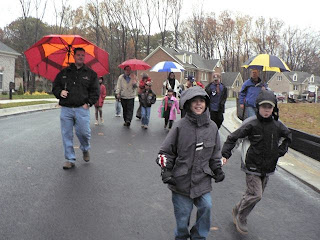 After a few more questions, and a walk over to see a lot that had just been cleared, the Cobra Patrol headed home. You can only postpone your homework for so long! 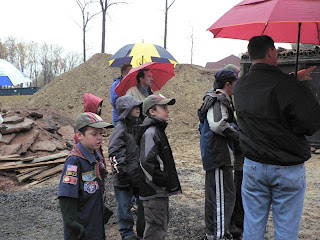 Thanks for a fun afternoon Cobra Patrol! What a well mannered, intelligent, lively group of young men you are. Your parents should be proud of you. And you are just another reason why I LOVE LIVING IN VIENNA!

(And PS - There are only 2 opportunities left to own a home in Thistle Ridge. prices start at $1,499,900. Contact Susan Hussey if you would like more info!)
Posted by The Belt Team at 12:51 PM No comments:

NO HEARTS OF STONE HERE

We love sharing good news! And since we live in a town like Vienna, we get the opportunity frequently.

If you follow our blog regularly, then you've read a number of stories about the types of folks you'll find here in Vienna. They are warm and friendly and big-hearted. I've told you about my neighbor Sheila (the Cupcake Fairy) and my other neighbor down the street (the Anonymous One) and I've shared lots of stories about charity fundraising events and other "good deeds". People like Sheila and the "Anonymous One" are why I love living in Vienna.

So - back to sharing good news.

One Sunday a few months back, we had a guest homilist at our church. His name is Father Keith O'Hare. He is a priest in our Diocese (the Diocese of Arlington), but he is currently serving the people in Banica, Dominican Republic. This particular Sunday, he was at our church here in Vienna (St. Mark Catholic Church) and he shared a number of stories about what life is like for the people in Banica.

One of the stories he told was about the children in Banica and how little they have. He told us that the little girls in the towns he visits often carry around stones.

Stones? Why stones? To protect themselves maybe? Why on Earth would girls carry around stones?!

Because these are what the little girls play with as dolls. The stones are cuddled and kissed and nestled in the little girls' arms - just the way our girls here in Vienna walk around with their Baby Dolls. Sometimes the girls find ways to draw eyes & mouths on the stones, but mostly their dolls are just simple stones.

Father O'Hare shared, "To me what is so beautiful is that children who are hungry and malnourished will put their physical needs aside and ask me for a doll...it shows me that they hunger to love and be loved, as much as they feel physical hunger. (Of course we're working on their hunger situation, with various projects in motion now on that front.)"

Wow. That paints a picture. Doesn't it?

Sitting in another piew at St. Mark's that day was Katie Vitale. Katie didn't just listen to the stories Father O'Hare told, she HEARD them.

Fast forward 2 months - and 26 boxes containing 850 (new & gently used) dolls and teddy bears are on their way to the little girls in Banica. All thanks to Katie Vitale! 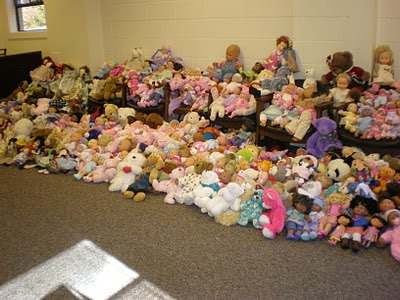 Katie organized the parish and school at St. Mark, along with her friends and neighbors, and after a mass collection of dolls & bears - it looks like Father O'Hare may be able to give a doll or bear to every child in the communities of Pilón, Guaroa, and Manyaya. Wow! Despite the distance in miles - these children will know how much we love them and how much their love touched us.

People like Katie Vitale and the St. Mark parishioners & schoolchildren at St. Mark Catholic School are just another reason why WE LOVE LIVING IN VIENNA!
Posted by The Belt Team at 1:48 PM No comments:

Email ThisBlogThis!Share to TwitterShare to FacebookShare to Pinterest
Labels: Life in Vienna, Vienna

Where In Vienna Is Carmen Sandiego?

Yes, ladies & gentlemen - it's time for ROUND SIX of our game - "Where In Vienna Is Carmen Sandiego"? So far, we have visited:
Let us know where you can find this sight in Vienna:

Posted by The Belt Team at 9:57 AM No comments: