“And above all, watch with glittering eyes the whole world around you because the greatest secrets are always hidden in the most unlikely places. Those who don't believe in magic will never find it.”

This quote from Roald Dahl (you probably remember reading his books as a child: "Charlie & the Chocolate Factory", "Matilda" and "James & the Giant Peach") is the perfect description of one of Vienna's best kept secrets - Jammin Java.

Tucked away in a small strip mall on Maple Avenue, you've probably driven by Jammin Java a million times. Because of its name, many people who have not stepped through the doors think it's just another coffee shop. And after all - don't we have a million of those in Northern Virginia? Who needs one more?!

Well, they do serve coffee there, but what they REALLY serve is DREAMS!

The truth is - it's one of the premiere music venues in all of the Washington D.C. area. We were reminded of that recently when we attended a show there and once again were surprised by the fact that most of the people in attendance drove from miles & miles around to see the show. We, on the other hand, drove all of a mile and a half.

As always, we arrived early so we could have dinner before the show. Not only do they have aweome chili (four different kinds!), but it's a great time to chat with the other folks who attend and oftentimes the musicians are around as well. This particular night we were there to see Pete & Maura Kennedy - national performers who are very popular locally - and Pete was out front before the show taking song requests. As we chatted with various people before the show, it was apparent that this audience was very similar to almost every audience we have ever experienced at Jammin Java.

What was the common thread? They were really knowledgeable not only about The Kennedys, but about music in general - super tuned in to the local music scene. We happen to be "oldies but goodies" and it's always fun to chat with other folks our age and share stories about all the shows we've seen dating back to the 70's. You see, the Northern Virginia-Washington D.C. area has a rich music history. (You'd be surprised by the legendary groups who performed in local community centers, churches & roller rinks back in the day - but that's another blog post!) 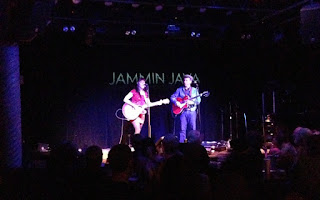 Take The Kennedys for example. Pete & Maura are well established musicians. Each has had a solo career in addition to touring together. They have toured nationally, as well as internationally, and have recorded & played with amazing folks like Nanci Griffith, Nils Lofgren, Roger McGuinn, Charlie Byrd, Mary Chapin Carpenter & Kelly Willis (just to name a few!). They have performed at places like Royal Albert Hall in London, Jack's Tracks in Nashville, Carnegie Hall, Wolftrap, Central Park and even The Tonight Show. And they currently host a radio show on Sirius Satellite Radio (channel 70) called "Dharma Cafe".

Pete & Maura used to live here locally (in Reston). They started performing together in 1993 and back in the early days we had the pleasure of seeing them more often. They're now based in New York, so this recent visit was a real treat for us. After the show, we had the chance to chat with Pete for a bit. Pete actually grew up in Northern VA. He went to O'Connell High School (my alma mater and the school across the street from where my husband grew up). Turns out that his Mom "Mrs. Kennedy" was the head of the Guidance Department for many, many years at O'Connell. What a small world!

And that's why I call Jammin Java "Vienna's Best kept Music Secret". If the average person who lived in Vienna had any idea what kind of talent was on display there, the place would be packed with locals. Pete & Maura Kennedy are just one example of the level of talent that performs at Jammin Java.There's something for everyone. They have shows for kids, teens, Gen Xers, Gen Y and even Seniors. And there's a great mix of well-established talent (like The Kennedys) and up & coming talent that will soon be seen on the national stage. If you live in Vienna and haven't checked out Jammin Java yet - check it out. You'll be surprised with the magic you might find there!