The "Secret" Side of Vienna, VA (Shhh Don't Tell Anyone!)

Did you know that Vienna has a "secret side"?

Well, it's really not so secret - if you know where to look!

We can't share ALL our secrets (after all, then they wouldn't be secrets any more!), but here are a few to get you going. And feel free to share your Vienna secrets below!

Recently, I went to a "secret concert" at one of my favorite music venues - Jammin Java. If you've never been there, you're really missing something special. As one of the band members said that night, "The rumor that this is a coffee house is out the window!". You might think by its name (including the word "Java") that it's a coffee house. They do have coffee (along with a full bar and great food). But you'd be missing the "Jammin" part. And boy was it jammin last time I was there!

And that brings me back to the "secret" part. I follow Mei, the "Jammin Java Door Gal" on Twitter. And one night, lo and behold, a tweet came out saying there would be a "secret concert" the following night. If you recall, Taylor Swift was recently in town and Need To Breathe, the band that had opened for her at the Verizon Center, was going to "secretly" appear at Jammin Java for their own concert. Needless to say, the secret spread quickly. Not so secret anymore. And tickets that went on sale at 10PM were sold out by 5AM the next morning - the fastest this band has ever sold out.

I can't tell you how much fun it was. The band had a blast and their joy was contagious. You could tell how much they appreciated "jammin" together in such a small venue after traveling the country in big venues like the Verizon Center. It was truly a magical night.

And this isn't the first time Jammin Java has had a "secret show". If you have teenage daughters (or "tweeners"), you might recognize the name Nick Jonas. So who performed "secretly" at Jammin Java back in February - the day before he performed at The White House? Yup - you got it - Nick Jonas.

One of our favorite Vienna restaurants is Maple Avenue Restaurant - MAR for short. (For you "old-timers" - it's where the "old Anita's" used to be, for you "newcomers" - it's across the street from Panera). MAR offers a super intimate, fun dining experience. (You can read a review here.) Their menu changes frequently, but it's always fresh & inventive.

Now comes the "secret" part. If you follow MAR on Facebook or Twitter, they sometimes announce "secret menu items". The servers will not mention them as specials when they bring your menu, but if you tell them you saw it on Facebook or Twitter, then you get a sweet opportunity to sample something extra special. Sometimes it's items that are being demo'd. Sometimes it's because they only have a small quantity of something. But it's always yummy. We liked the baked mac special one night. I know that doesn't sound exciting - but boy was it good! Chef Tim Ma has a way of taking something you might think of as pedestrian and turning it into a culinary masterpiece. (He also has a hilarious sense of humor with comments on Twitter like "Did we get pulled over on our scooter by vienna police? Yes. Was it because they were bored? yes. Was it embarassing, absolutely." and "MAR will close early tonight, staff will be taking pickleback shots, then heading over to the potato sack slide at #vivavienna. don't judge.")

Other local restaurants & eateries let you in on the "secret" when they have new menu items or when they are about to take items off the menu so you can get them one last time before they disappear.

In today's economy, who doesn't want a discount? Well, a lot of Vienna's local businesses are turning to social media to spread the word about their products and services. It's no or low cost advertising for them. AND, if you pay attention - you can take advantage of the "secret discounts" they often offer. Here are some examples we've made the most of (note - these are not current discounts - most of these "secrets" are for one day only and sometimes just for a few hours).

Whole Foods Vienna - "After you get your chicken breasts for only $3.99/lb head to customer service and say "I'm not chicken, but I'm all natural". You'll get a delicious bottle of marinade on the house."

Sweetleaf Cafe - Get an extra veggie topping on a salad "created by you" for free.

(If all this sounds too complicated, just follow The Belt Team on Twitter. We tend to "retweet" all kinds of great info about Vienna, because as you know, WE LOVE LIVING IN VIENNA and THERES NO PLACE LIKE VIENNA (Dot Com!) (And for Vienna real estate "secrets", you can follow us on our blog or find us on Facebook.)

There are lots more things to find on Vienna's "Secret Side" - but some things just have to stay secret! What are you favorite secrets about Vienna?
Posted by The Belt Team at 3:15 PM No comments:

Not Your Mother's Summer Camp

Summer camp in Vienna ain't what it used to be - and we think that's a GOOD thing!

There can be no doubt . . . The Belt Team loves Vienna. The answer to what makes Vienna so special often lies with the families and events that shape our lives here. Here's an example:

Last week, many of Vienna’s children had the opportunity to learn and have fun at two truly unique summer camps.

Westbriar Elementary School's PTA hosted "Camp Invention" again this year. Camp Invention is designed to spark creativity and give kids a unique hands-on experience building and creating their own inventions. The kids brought items from home to inspire their creativity. I’ve heard they explored and recycled everything from alarm clocks to satellite dishes!

Another unique camp opportunity for Vienna children last week (including my children Matthew & Grace) was Holy Comforter’s Vacation Bible School. The theme this year was "Christian themes in the Harry Potter novels". Children explored JK Rowling’s engaging plots from a deeper perspective and had lots of fun in the process. Here, students arrive by “Hogwarts Express”. 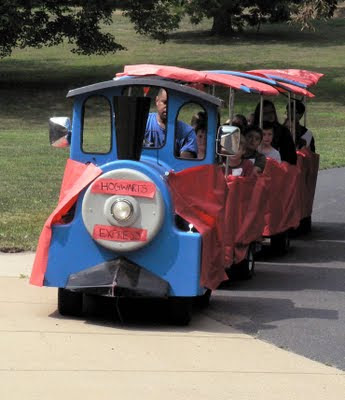 In very broad terms, the plot of the Harry Potter novels can be described as a young boy's transition from ordinary . . . to someone who is mature, learned and extraordinary. Exceptional teachers and mentors help him all along the way.

Activities included everything from games of Quidditch - to Care of Godly Creatures - to feasts in the Great Hall! About 155 children took part as "students", in addition to 25 youth who acted as "prefects" and 10 adult "professors". (Pictured here are Grace and Matthew with Hagrid, Professor of Godly Creatures!). 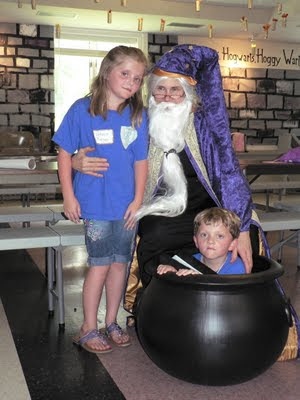 Last week in Vienna, our children experienced the “magic” of growth under the guidance of exceptional volunteers at these two camps. If you missed it this year, mark your calendars now to check them out next summer!
Posted by The Belt Team at 12:54 PM No comments: