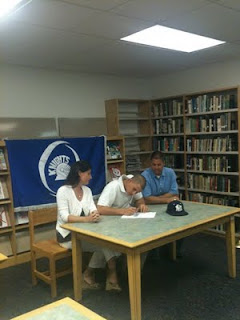 Nick is a student at Bishop O'Connell High School in Arlington and played for the Prospect Stars elite travel baseball team this past summer. Nick is also a "graduate" of our very own Vienna Little League! 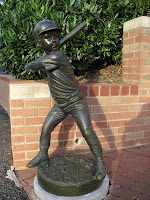 We've written several articles about Vienna Little League and baseball in Vienna, VA. It's defiinitely one of THE top places to play ball in our area and has a LONG tradition of success . . . all the way to Williamsport.


This year alone, there are at least 5 Vienna Little League "alumni" that we know have signed to play college baseball - and that is no easy feat!

Congrats to the following young men and their families:
Here's some interesting triva about these 5 boys: 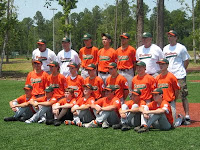 I have watched these guys grow from little boys into young men. And what an honor it has been. Their accomplishment of "making it to the next level" in baseball is truly something special. And it's not just about baseball.

These boys set a great example for all of us about how to dream big and work hard. For not one of these boys was handed anything. They may have been provided the opportunities, but each one worked hard - day after day after day - very consciously and very conscientiously. And they did it when no one was looking (Nicki - this means you!). They trained and played and worked and watched and learned & kept getting better.

For getting signed to a college sports team - any sport - is not like it used to be "back in the day" when lots of players would "try out" or try to "walk on". It works more along the lines of a quote I remember Norm saying on the TV show "Cheers". He said, "It's a dog-eat-dog world out there and some days I feel like I'm wearing milk bone underwear."

We can all learn a lesson about what a lot of passion & hard work can bring you. Now - don't get me wrong. They had a LOT of fun doing what they did. However, many people "want" good things to happen to them, but they aren't willing to work & make sacrifices. These kids did. One of the players I listed above is currently one of the most talented in our area. He's even drawn some scouting interest from the pros. But when he was 12 & 13, he was the smallest kid on the team. And when it's your first year on the "big field" - that sure doesn't make anything easier. But as far as he was concerned, that meant nothing. He wanted to play ball. And play ball he did. He is one of the fierceest competitors I have ever met and no one will ever tell him he can't do something. If you do, he'll just prove you wrong. Would that we all grasped on to our dreams and made them happen like he has.

Every one of these boys told me when they were 12 years old that they wanted to play in the big leagues. They were playing small town baseball, but they had big city baseball dreams. Well, those dreams may still be far away - but that was 6 years ago and they have all just taken a GIANT step in that direction.

Don't be surprised if one day you see their faces on a baseball card!
Posted by The Belt Team at 2:25 PM