If you're looking for good places to sled before the snow melts, you may want to check out our post from last year about "Best Sledding Hills In Vienna"!

Cheers!
Posted by The Belt Team at 5:21 PM No comments:

If you haven't caught a James Madison High School basketball game yet, then you're missing something special.

The basketball team has been struggling. Starting the season off with 4 losses in a row was tough. But the Warhawks, led by Senior Captains Daniel McNerney, P.D. Knipe and Ian Doyle have turned things around and their record now stands at 4-8, with 2 straight wins this past week: a 52-40 win over Marshall High School and a 75-74 win in triple overtime against McLean High School.

Yup - I said a ONE POINT WIN IN TRIPLE OVERTIME!
You can't get more exciting than that! Or can you? 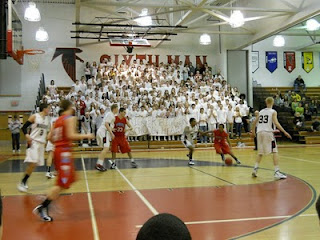 Well, I don't know if YOU can get more exciting than that - but the Warhawk FANS can DEFINITELY get more exciting than that. Having been a fan of Northern Virginia Sports since back in the 70's, I can tell you that the trend at many high schools is that each sport has a SMALL core group of passionate fans. Fans are spread thinly over the many options that exist and each sport sort of exists in its own separate world. Madison High School, for example, has 43 different sports teams. And many of these teams have their own little group of committed fans.

BUT - if you come to a Madison basketball game - you'll see a HUGE group of student fans who support their team like no other I've ever seen. They call themselves the "Sixth Man". (If you look closely in the photo above, you can see where they've painted "SIXTH MAN" above the student section in their home gym.)

The first time I saw the group in action was at the Oakton - Madison basketball game. Keep in mind that at this point in the season, Madison's record was 0-4. They had yet to win a game. And they had suffered some tough losses - including a season opener that they lost to O'Connell by 41 points. Most fans would have quieted down some, maybe even given up. But not this group of kids. These are not "Fair Weather Fans"!

It was an Away Game. At a school that probably has 500 more students than Madison does. And yet, the student section for Madison was PACKED. Madison had more fans than Oakton. And the game was at Oakton! These kids rocked the gym. It was more like a college game than any high school game I've ever seen. And lo & behold, Madison captured their first win. The team played hard, but I've gotta believe that the fans are due a little bit of credit for that win. And it was a BIG win because Oakton is Madison's cross-town rival!

The season continues. And this group of fans shows up to every game. Not only do they show up and cheer loudly. But they have cheers & outfits that are so well choreographed you'd think they had Michael Jackson or Oliver Stone setting things up behind the scenes. They coordinate so all the fans know what colors to wear ahead of time. For example, at last night's game we saw a "white out". Every student wore white from head to toe. 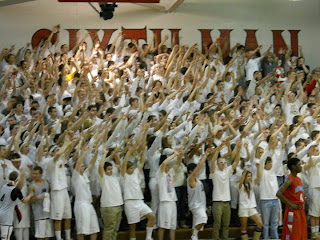 Sometimes they wear red. And that's when they do my favorite stunt - "The Parting of the Red Sea" - led by Madison student Tommy Curley dressed up like Moses.

Last night, one of those wacky Warhawk fans (Andrew Gay) even flipped out. LITERALLY! Thanks to Madison student Jonny Graham who took the photos above & the video below, you can see it too!

﻿
If you'd like to experience it all for yourself, come out to see the Madison Warhawks (Kavan Ranasinghe, Daniel McNerney, Jason Mann, P.D. Knipe, Nate Favero, Ian Doyle, Connor Douglas, Christian Prince, Max Ehrsam, Jack Baule, Tim Alexander, Gunnar Baskin & John Adam!) beat Langley on Friday night, January 14th at 7:30PM (at Madison). Or you can check out the rest of the Madison High School Boys Basketball schedule here. (PS - Since it's a home game, we hear there may be a "red out". So maybe Moses will be in the building!)

Our prediction is that this team will peak just in time for playoffs! So good luck to all the players - we're rooting for you!

Fabulous fans - just another reason why WE LOVE LIVING IN VIENNA!
*********************************************************
Late Update: Our hearts & prayers go out to the family & friends of Khristin Kyllo who passed away yesterday. Khristin's time as a Madison student athlete (class of 2010) embodied the spirit of passion & perserverance that led the way for this year's Sixth Man. Note that the Sixth Man may be attending the Madison Girls Basketball game tonight AT Langley instead of the Boys game to support Khristin’s former teammates.
Posted by The Belt Team at 5:20 PM 1 comment: 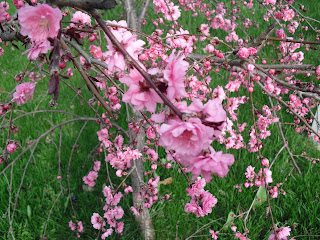 Tonight they're calling for snow, so why are we saying "Welcome to Spring!"?

Well, for those of us who are "behind the scenes" in the real estate world, Spring has already started. Buyers are out looking and Sellers are busy prepping their homes for market. We normally keep our "Northern Virginia Real Estate" blog and our "Life In Vienna" blogs separate, but since this is a blog about "Life In Vienna" - we can't ignore the topic of real estate. Isn't that everyone's favorite cocktail party conversation?

If you're thinking of buying or selling your home this year - or maybe you're just curious about "the market" - you might want to take a look at our Northern Virginia real estate blog. If you listen to the national news only, you may be getting a false sense of what is happening in our local Vienna real estate market. For while many areas around the country are truly suffering, Vienna is not generally one of those areas. In fact, Forbes recently named Washington DC as #1 on their list of "Cities Where Home Values Will Rise Most in 2011"!

The Belt Team tracks the market very closely - both statistically and anecdotally. We have information that many folks don't - because we are the #1 Real Estate Team in Vienna. (There are more than 10,000 Realtors in Northern VA. And the next top agent in Vienna sold less than half as many homes as us last year.) We have our finger on the pulse of Vienna and we post updates about the Vienna market once a week. So if you want to know what's happening in Vienna Real Estate - come join the conversation on our real estate blog. It's quite interesting!

(Vienna is currently experiencing a healthy, balanced real estate market - just another reason why WE LOVE LIVING IN VIENNA!)
Posted by The Belt Team at 1:19 PM No comments:

We hear "congratulations" are in order for the James Madison High School Warhawk basketball team. They won their first District game in a triple overtime thriller last night over the McLean Highlanders. WAY TO GO BOYS!
Posted by The Belt Team at 1:36 PM No comments: