Read our detailed weekly Vienna Real Estate Update here.
Posted by The Belt Team at 9:10 AM No comments:

They Even Have A Pig!

One of the great things about Vienna is the fact that it's full of small, local businesses. While Vienna may be located just a few miles from a number of malls & big corporate stores, Vienna still retains its small town character with all kinds of "Mom & Pop" stores. 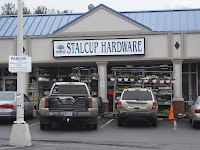 One of our favorites is Stalcup Hardware - owned and operated by Vienna resident, Justin Stalcup.

You may recognize this truck. 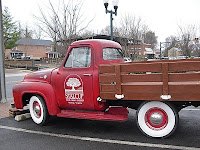 It sits along Maple Avenue in front of the store. And the personality this truck exudes outside is exactly what you'll find inside the store . . . quality, charm & good old fashioned service! 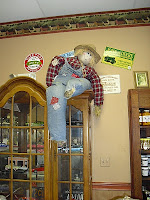 Stalcup's first hardware store opened up in McLean in 1990 and the Vienna store opened in 2005. But Stalcup Hardware actually goes back even farther than 1990 - to a roadside stand in the 1960's! (Justin Stalcup worked there starting when he was 8 years old.)

Come inside the store and see the homemade jams, jellies & pies and you'll think you've gone back in time. Yum! 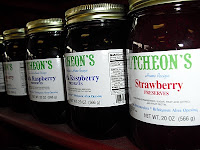 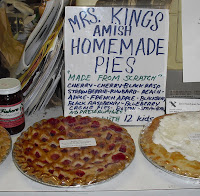 Forget Home Depot, you can find just anything at Stalcup's. In fact, Stalcup's has one of the biggest nuts & bolts selections in the entire area. 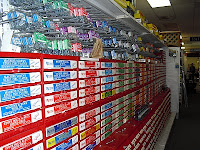 But it's not just a hardware store. Justin Stalcup takes particular pride this time of year in the incredible selection of spring flowers. And if you don't know what to plant - just ask the owner. He's usually there to offer great advice. (In the summertime, Stalcup's also had awesome fresh farm produce for sale!) 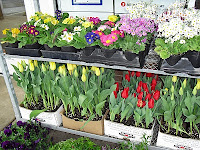 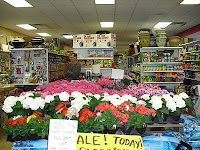 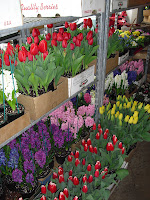 Now, remember I said you could find just about anything at Stalcup's? Well - we walked in recently and guess what we saw?! A PIG! 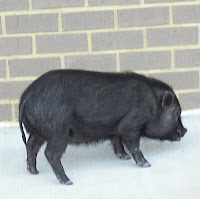 "Rocky" the chocolate lab greeted us too, but lots of stores have dogs in residence. How many do you know that have a pig? And not just any pig - but a housebroken, 6 month old pig named "Foxy Cleopatra"! 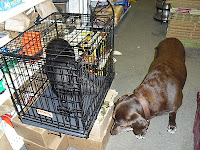 "Foxy" & "Rocky" are great friends. In fact, since "Foxy" loves carrots, "Rocky" has learned to like them too!

I'd say if the owner of this hardware store can train a pig - he can probably help you with about anything else you might need.

And There's No Place Like Vienna, VA!
Posted by The Belt Team at 1:47 PM No comments:

Skate Park On Wheels in Vienna

Did you used to skate board when you were a kid? Wonder if you can still ollie or kickflip or maybe even backflip? Or maybe your kids have been begging you to go to a skate park?

Well, this coming Saturday (April 3rd) - you can check out a "Skate Park on Wheels" in the parking lot at the Vienna Volunteer Fire Department! The park will be there from 2PM to 5PM and will have ramps, rails & jumps!

What better place to see if you still have the moves or if your kids can follow in your footsteps than the Vienna VFD?

You have to be at least 6 years old (and adults are welcome too!). Everyone has to wear a helmet and those under 16 have to wear wrist guards, elbow pads & knee pads.

And PS - If this is a little too "wild" for you, you might like the Skate Nights at the Vienna Community Center better. All ages are welcome. It's $1 per person. You bring your own skates & safety equipment. And you can skate Fridays from 6:30-8:00PM starting April 16th.
Posted by The Belt Team at 8:37 AM No comments:

Just as the blossoms on the cherry trees are beginning to come out, Spring has sprung in real estate. Let’s take a look at what has happened in the Vienna Oakton real estate market over the past week:

Click here For the full Vienna Oakton Real Estate Update
Posted by The Belt Team at 11:48 AM No comments:

There's nothing more American than "baseball & apple pie". Vienna has a long history of great baseball teams at every level - from Little League to high school. And this year's Madison High School Warhawks baseball team is coached by the President of the National Baseball Coaches' Association - Mark "Pudge" Gjormand.

This week, "Guest Blogger" Dave Graham steps up to the plate to give us a preview of what we can look forward to with Warhawk Baseball.

The 2010 season for the James Madison High School Warhawk baseball program promises to be an exciting one. Head Coach Mark “Pudge” Gjormand returns for his 15th season at the helm of a veteran squad. Last year a young team which returned only one starter and one pitcher won 13, lost 7 and tied for third in the Liberty District with a 9-5 record.

By contrast, this year eighteen players return including seven starters and three pitchers. Coach Gjormand observed that, “It makes things a lot easier to have so many players who already understand the way we do things. Especially with all the snow we’ve had it would have been harder to get the season started with a young team. The Town of Vienna and Vienna Babe Ruth have been a great help by letting us use the artificial turf at Waters Field. We hope to make them proud of us.”

Coach Gjormand notes that, “One of the things that makes Madison baseball so special is the unique relationship between the team and the community. About 95% of our varsity and JV players played in Vienna Little League. These kids have been playing ball with or against one another as far back as T-ball. Those close knit relationships run not just between the players but also between families. When the Warhawks take the field, the jersey may say Madison but the players know they represent their families, VLL and the Town of Vienna.”

The community’s support of the team’s fund raising activities will enable the varsity to travel to Florida to participate in the prestigious Sarasota Spring Break Classic. Ticket sales also help support the program. This year marks the inaugural season for the new snack bar and bathrooms which are being completed with the help of Sekas Homes and the Madison Booster Club. Admission is $5 and home games start at 6:30 on the following dates:

Thanks for your support Vienna and Go Warhawks!
Posted by The Belt Team at 6:52 PM No comments:

Are you the kind of person that likes everything big & busy? Is your motto "Go Big or Go Home"? Or are you the type of person who likes things small & simple? Either way - Vienna is for you. And here's just one example of that. 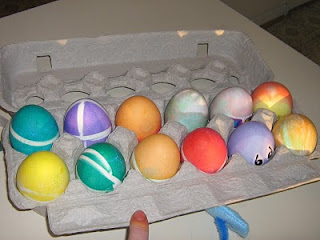 Easter is coming soon and that means it's time for an old fashioned Easter Egg Hunt or an Easter Egg Roll (and no - an Easter Egg Roll is not Chinese food!). Anyway, when you live in Vienna, you always have the opportunity to "do it up big" - or keep it small.

If you like to live large - then you might enjoy the White House Easter Egg Roll. It takes place on the South Lawn of The White House and has been a White House tradition for 130 years! Tickets are given out via an online lottery. Events include rolling a hard-boiled colored egg on the lawn with a large serving spoon - plus an amazing array of activities including musical performances, sports activities, photos, crafts & cooking stations. And each child receives a commemorative wooden Easter egg signed by the President and First Lady.

If you like things on a smaller scale, then stay right here in Vienna and participate in the Old Fashioned Easter Egg Hunt offered by Historic Vienna. It takes place on the grounds of the historic Freeman Store on Church Street on March 27th from 10:30-11:30AM. They'll have a storyteller, egg hunt, egg painting and games. 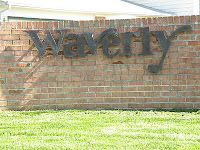 The Belt Team LOVES selling homes in Waverly. Waverly is a wonderful subdivision of 148 homes in Vienna - near Wolftrap Elementary School and in the Madison High School district. It’s about halfway between the “Heart of Vienna” and Wolftrap Farm Park and is one of Vienna’s most popular “sidewalk” communities.

And it’s where several members of The Belt Team grew up. In fact, 5 of the 8 Belt Team members have lived in Waverly. Remember the days when kids played neighborhood flashlight tag at night and kickball during the day? When kids built tree forts & caught pollywogs in the creek? We certainly do. Because that’s what we did many years ago when we lived in Waverly. Waverly was popular then and it remains popular now. (There’s even a Facebook group called “The Kids of Clachan Court & Waverly Development”.)
Waverly Real Estate Update
Posted by The Belt Team at 5:53 AM No comments:

Most of our posts here have been light-hearted . . . about restaurants and shops and the wonderful people you find in Vienna. But sometimes things happen that make you stop & really get serious. And this week was one of those times.

One of our Belt Team members, Jerry Belt, was admitted to the hospital. Again. We almost lost him last year, but thanks to some miraculous events and the expert care of some of the top medical experts in the country - he's still with us. Those same doctors are doing their magic again. And before we know it, we hope to have Jerry back on his feet.

So this morning when I was thinking about what to post on our Vienna blog today, it hit me. We are blessed to live in the most amazing location for anyone who needs specialized medical care. You can find about any kind of expert you need - physicians and specialists who are often world-renowned. And just about anything you need is within a few minutes drive. No need to spend hours on the road or travel to other cities. It's all here.

I reflected back to when our godson was born. He weighed 1 lb 13 oz. (Yes - that's 1 lb 13 oz - NOT 13 lbs 1 oz!). He was smaller than his father's hand. Our godson is now 16 years old and in perfect health, but he was in the hospital for months - in Fairfax Hospital's special neo-natal unit. Some parents who had babies in the same unit had to drive for hours each day to see their child. But not us.

And I reflected back to when my daughter was diagnosed with Type 1 diabetes. And to the week we spent at Children's National Medical Center in Washington DC. We learned about how to care for our daughter from the BEST juvenile endocrinologist in the country - Dr. Fran Cogen. All at a location just a short drive from our home. It sure was a lot less stressful for our daughter and for us. And the care she received was top-notch.

I could give you example after example. The accessibility of good medical care is one reason why CNNMoney.com rated Vienna in the Top 20 "Best Places for a Healthy Retirement".

Right now, good medical care may not be of concern to you. But when it becomes important - you'll understand why we love living in Vienna so much.
Posted by The Belt Team at 12:15 PM No comments: 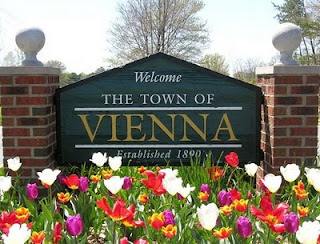 Happy Anniversary to the Town of Vienna. Vienna turned 120 yesterday. Now that's a LOT of candles on a birthday cake!
Posted by The Belt Team at 6:32 AM No comments: