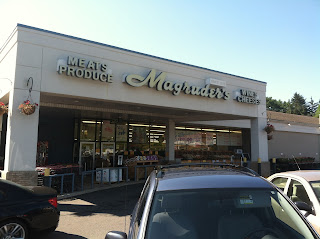 When I moved to Vienna, Virginia, I had no idea that I would have a constant reminder of my previous life from the  “other side of the river” (Maryland) and it would be . . . . a grocery store. A grocery store? Are you kidding me?  You’re going to wax poetic about a grocery store? The answer is, yes, I am.

If you are not a native Washingtonian, let me explain. Magruder's is a family owned store and has been “ a Washington tradition since 1875”.  Where I grew up, in Chevy Chase, Maryland, we lived near one of the first Magruder’s stores that ever opened in Washington and I was sent there seemingly daily for the  specials.  “Make sure you get the freshest chicken”, “Don’t buy the fish if the eyes are cloudy” . This is what I was told on the way out the door.

The aisles were too small, the floors not pristine, and they didn’t have the great selection of junk food that the big chain stores had.  What it did have, and what they still have today, are, friendly employees, and great deals.


Best of all, for me, the location in Vienna is close to my house so I can re-live my youth - fighting for specials in those narrow aisles!

(This edition of TheresNoPlaceLikeVienna.com was contributed by Catharine Via)
Posted by The Belt Team at 7:48 AM No comments: